What to see in Cadiz

One of the main tourist attractions to see in Cádiz is its beautiful promenade, which for many bears a great resemblance to the Malecon in Havana. A walk full of stray cats and seagulls, with the image of the cathedral in the background, from Postal!

Walking through this place and watching the sunset from there is one of the most important things to see in Cádiz. Also from this point you can get some great photos! 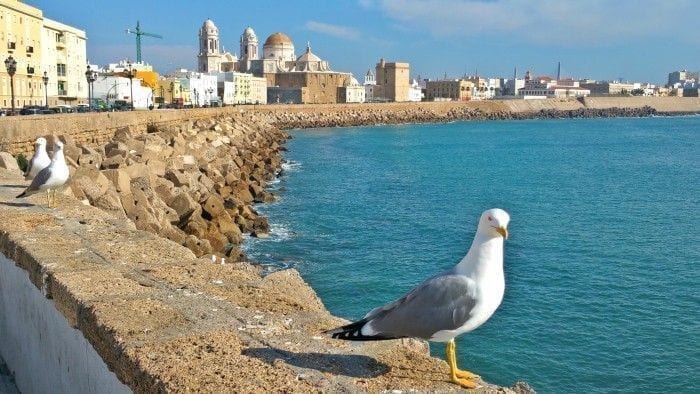 A few steps from the cathedral is one of the most important places to see in Cádiz and one of the central nuclei of the city, the impressive and beautiful Plaza San Juan de Dios. The square is full of palm trees and has fountains that dance to the music and change color. In it, interesting buildings such as the church of San Juan de Dios, the Casa de los Pazos Miranda and the City Hall result from two stages; the first and main neoclassical, started in 1799 by the architect Torcuato Benjumeda, and the second corresponding to the Elizabethan period, the work of García Alamo. 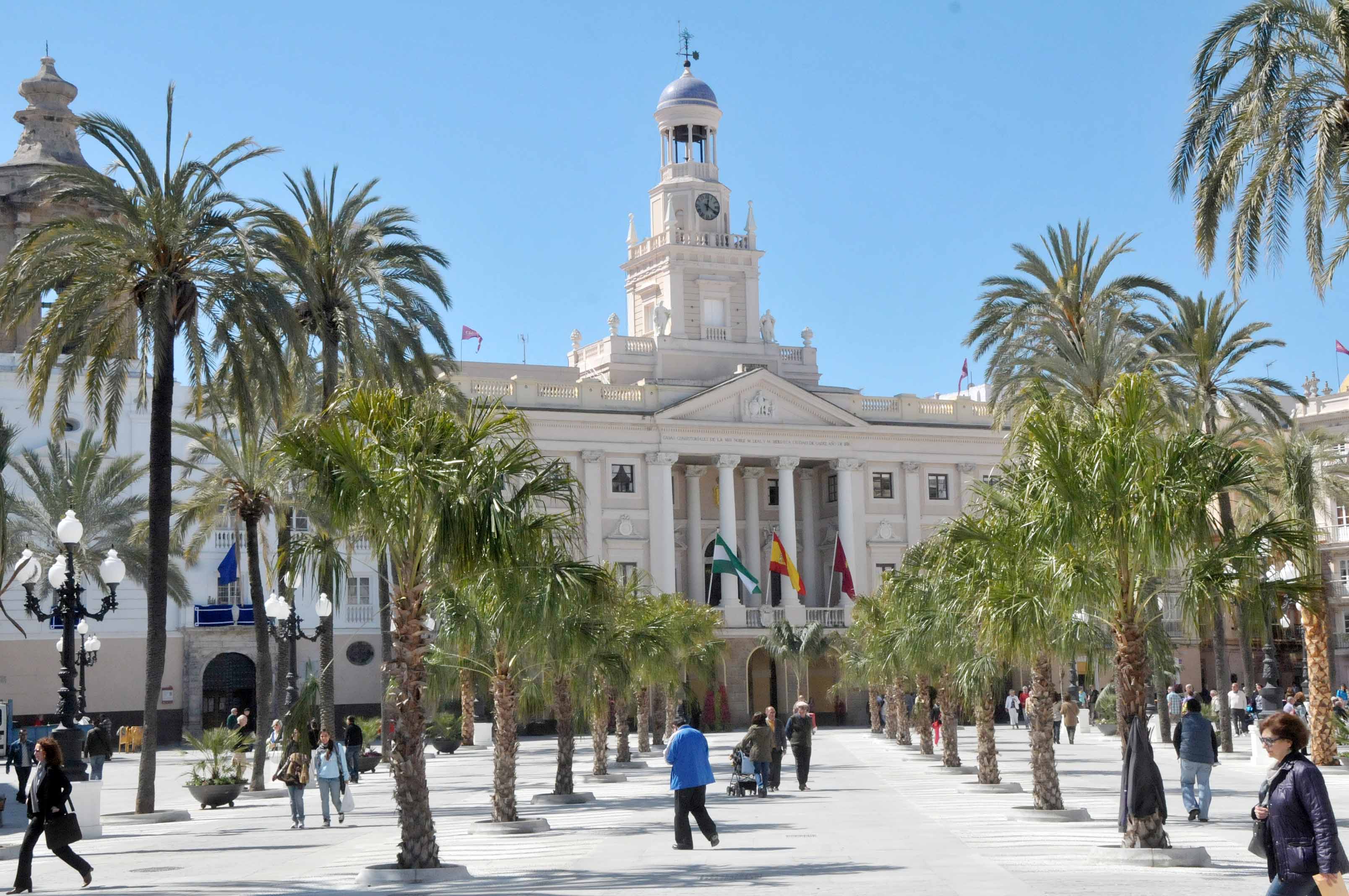 The Barrio del Pópulo, located at the entrance to the old town, between the Town Hall and the Cathedral, is the oldest to see in Cádiz and its true medieval nucleus, whose origin dates back to the 13th century.

The neighborhood has three entrance arches, the Arco de la Rosa, with its machicolations; the Pópulo Arch, located under the chapel of the same name and of which the interior curvature stands out, which is a timid warhead arch and the Arch of the Whites, where the Virgin’s chapel was located.

Its small cobbled streets are full of bars where you can have tapas and go out at night. Without a doubt one of the best things to do and see in Cádiz. 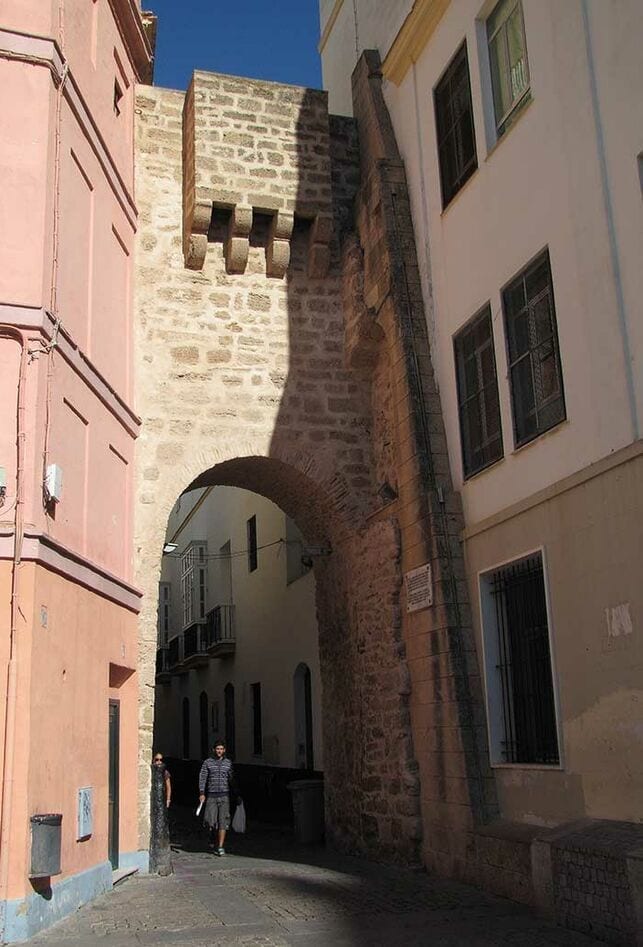 4 The central market of cadiz

This huge venue is one of the places that most surprised us on our visit to Cádiz. It is a market that welcomes a multitude of stalls, among which those of fresh fish and seafood stand out. One of the most important and peculiar places to see in Cádiz. 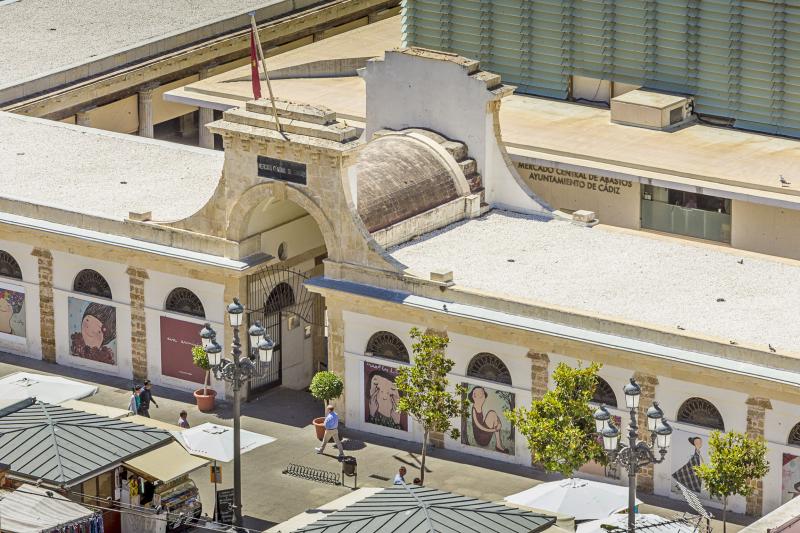 The Plaza de las Flores is one of the most charming places to see in Cádiz. It is characterized by its showy and colorful flower stalls. The central area of the square is occupied by the Columela monument, a tribute to one of the most illustrious figures in the history of Cádiz, Lucius Iunius Moderatus, author of the first written work on agriculture.

Its vitality is increased during the Carnival festivities, since a large part of the street performances of the groups are centralized in the immediate Plaza de la Libertad. 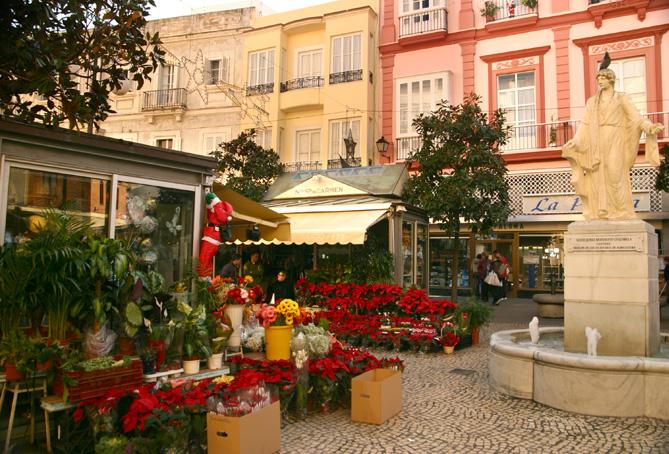 At 45 meters high, Torre Tavira is the highest point in the old city of Cádiz. It is located in the Casa-Palacio de los Marqueses de Recaño (current Conservatory of Music of Cádiz), on the corner between Marqués del Real Tesoro and Sacramento streets. It was built in the 18th century in the Baroque style.

It currently houses the Camera Obscura, one of the main attractions to see in Cádiz, consisting of an optical system that reflects the scenes that take place outside in real time on a circular white screen during 15-minute sessions. It also has two exhibition rooms and a viewpoint from where you will get one of the best views of the city of Cádiz. 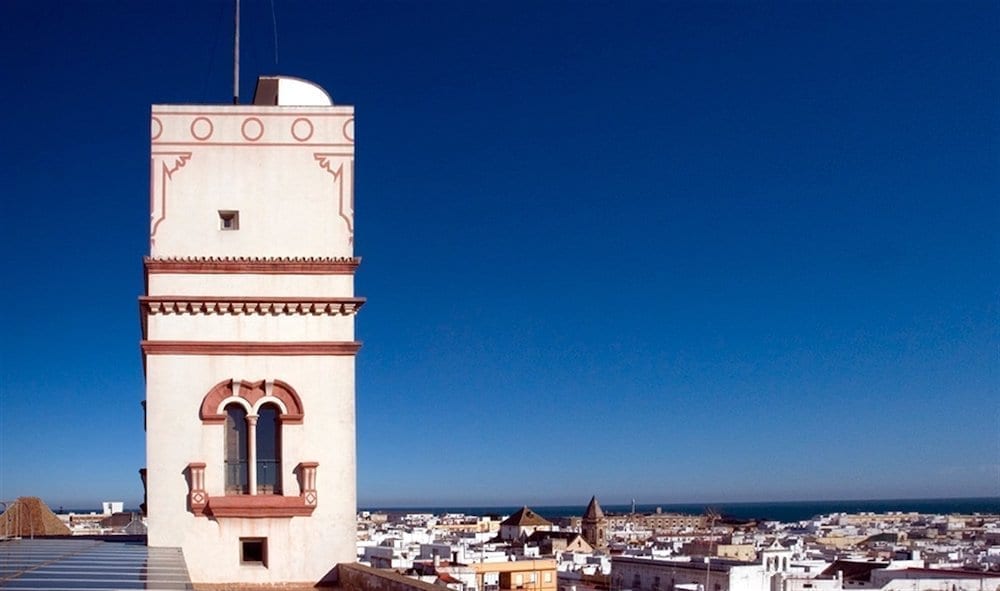 Walking from the Tavira Tower we reach the Plaza Fragela. In front of the Casa de las Viudas and next to the Faculty of Medicine of the University of Cádiz is located the mecca of carnival and one of the most important places to see in Cádiz, the Gran Teatro Falla, which owes its name to the favorite son from the city Manuel de Falla.

Neo-Mudejar style, it is built in red brick, and has three large horseshoe arched doors on its main facade, with alternate segments in red and white. 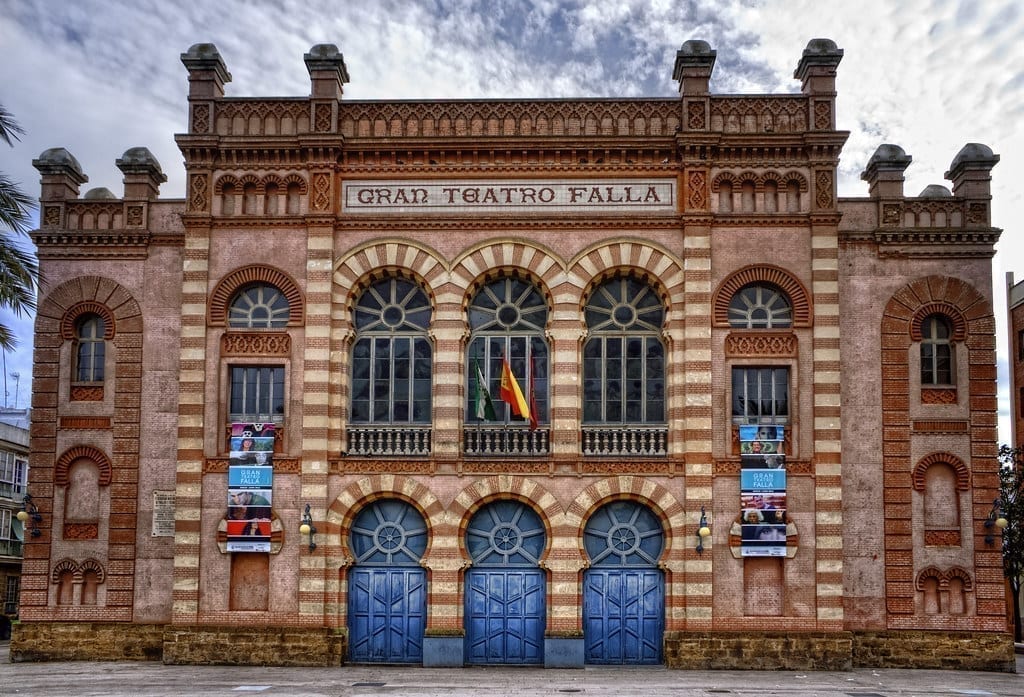 Genovés Park is one of the most important places to see in Cádiz. It dates from the end of the 18th century and since its opening it appears in almost all the rankings as one of the most beautiful urban parks in Spain. It is surrounded by the walls of the old city and located next to the old town and the sea. At the end of the 19th century, the Valencian gardener Eduardo Genovés y Puig turned it into a true botanical sample where you can find dozens of different species.

Something that we loved was finding a pond with a waterfall, several huge dinosaur figures and where dozens of birds swam to which we could feed. At the back of the park is a huge promenade from where you can admire the sea and the nearby towns of Rota and Puerto de Santa María.

Continuing along the promenade from the Genovés Park we arrive at the Castillo de Santa Catalina, a fortification located on the beach of La Caleta that enters the sea thanks to some breakwaters. It was built in the late sixteenth century following the plans of the engineer Cristóbal de Rojas. It has a starry plant with Italian influence and served as a military prison. It was declared a Site of Cultural Interest in 1985.

Today this fortress has become a great multipurpose cultural and recreational space, and it also hosts concerts and summer activities in the Castle’s parade ground.

You can sit on the terrace of the esplanade next door to drink some canes while you toast in the sun and contemplate the Castle of Santa Catalina and San Sebastián in the background. 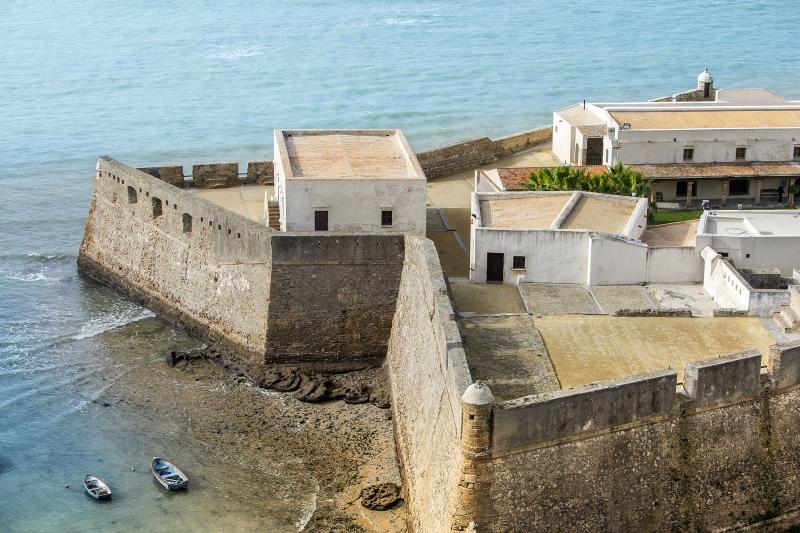 The Castillo de San Sebastián is one of the best kept jewels to see in Cádiz. For many years this Castle, located on the edge of the promenade that runs along the jetty of Playa de la Caleta, has been closed to the public for different reasons. According to classical tradition, the Phoenician temple of Moloch / Kronos used to settle on this islet in the Old Age.

The original silhouette of this castle over the sea has made it the scene of several films shot in Cádiz, including Alatriste, or the Hollywood movie “Die another day” by agent James Bond, starring Pierce Brosnan and Halle Berry. 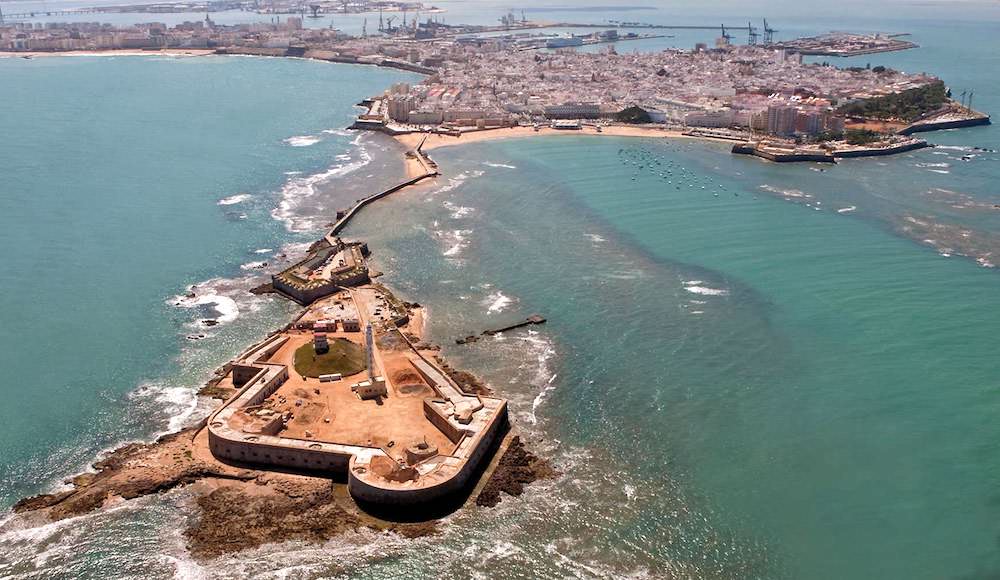