The 10 most important sites to see in Toledo

This list of places to visit in Toledo will help you not miss anything important in one of the best preserved and most beautiful medieval cities in Europe.
Mandatory stop for history buffs to live peacefully for centuries Christians, Muslims and Jews, respecting their customs and privileges, Toledo is thanks to this great example of tolerance, known as the City of Three Cultures in addition to retaining a great legacy of buildings and architectural elements characteristic of each religion.
Here, in addition to visiting ancient churches, convents and synagogues, we recommend you to stroll at sunset through the narrow streets of the center, climb up to the spectacular viewpoint of the Valley, see the masterpieces of El Greco and above all, try the marzipan, the star product from the city, without forgetting that when crossing the Alcántara Bridge or the Bisagra Gate, you will enter a historic center declared a World Heritage Site, which will leave you speechless.

Based on the experience of the two times we visited the city from the capital of Spain, considered one of the best excursions in Madrid, we have made this list of places to see in Toledo essential. We start!

The Cathedral of Santa Maria, also called Primada Cathedral of Spain, is one of the most impressive cathedrals in the world and one of the most essential places to visit in Toledo.
This Gothic cathedral, built between 1226 and 1493, stands out for having an exterior with 3 facades: a main one richly decorated with a 92-meter-high tower, the Clock Gate that is the oldest facade and the Lions Gate, The last one to be built.
If the exterior is spectacular, when you enter inside you will be speechless when you see places like the Main Chapel and its altarpiece, the Chapter House, the Mozarabic Chapel, the stained glass, the Choir or the Treasury, among others.
The ticket has a price of 10 euros, although for 2 euros more you can book this guided tour that will allow you to better know the history of the cathedral or take this offer that also includes the famous tour of the 3 cultures.

Another alternative with which you can save time and money is to buy the Toledo Card, which includes the skip-the-line entrance to the cathedral and the city’s main tourist attractions.
Visiting hours: every day from 10 a.m. to 6 p.m. except Sundays that open visits to the public at 2 p.m. 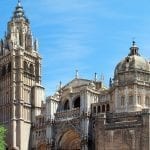 Going up to the Mirador del Valle to see the sunrise or sunset, with fantastic views of the city and the Tagus River, is undoubtedly one of the best things to do in Toledo.
These viewpoints, located south of the city on a ring road, allow you to have the best perspective of some of the most characteristic buildings in the city such as the Alcazar.
To complete the experience of the viewpoints, we recommend you go up to the Piedra del Rey Moro, to have even more panoramic views of the city and the entire environment.

To reach the viewpoint you can walk up in about 40 minutes from the center or from the AVE station, take a taxi that for about 5 euros will leave you at the viewpoint. Another option is to take the L71 bus that leaves from the Puerta de la Bisagra or book the tourist train that stops at the main points of interest including this viewpoint. 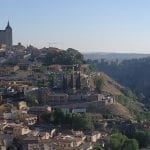 The Synagogue of Santa María La Blanca, located in the old Jewish quarter, is one of our favorite places to see in Toledo.
This Mudejar religious building, built in 1180, was used for more than 200 years as a synagogue, until it was converted into a church under the invocation of the Virgin in 1411.
It highlights its sober exterior that contrasts with a beautiful interior of white walls, octagonal pillars and horseshoe arches, which have served as a model for other synagogues around the world.
Another interesting synagogue, located in the Jewish quarter, is that of the 14th-century Transit, which has a magnificent wooden coffering and the interesting Sephardic Museum, inside.
Visiting hours Synagogue of Santa María La Blanca: every day from 10am to 5:45 pm
Visiting Hours: Transit Synagogue: Tuesday to Saturday from 9:30 a.m. to 7:30 p.m., Sundays and holidays from 10 a.m. to 3 p.m. The months of November to February close at 6pm. 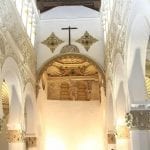 The monastery of San Juan de los Reyes, built in 1476 by order of the Catholic Monarchs, is another of the most beautiful places to visit in Toledo.
In an Elizabethan Gothic style, this Franciscan building impresses with the two-story cloister full of sculptures and decorative elements, as well as its interior in which there is a church with several shields and symbols of the Catholic Monarchs, as well as a beautiful altarpiece.
Once the visit to this monastery is finished, we advise you to return to the center through Angel Street, one of the most beautiful in Toledo.

To know the interesting history of this city and not miss anything important it is highly recommended to book this guided tour of the Toledo of the three cultures or this free tour of Toledo Free!, Both with a guide in Spanish.
Visiting hours: every day from 10 a.m. to 6:45 p.m. from March to October and the other months it closes one hour earlier. 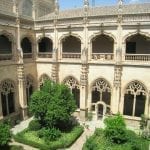 Crossing the Alcántara Bridge is the most common way to enter the walled city of Toledo, if you arrive by train or bus.
This ancient Roman bridge, almost 200 meters long, was built on the Tagus river between 103 and 104 and is a wonderful wonder that you have to visit in Toledo.
The bridge supported by 5 pillars, which reach a maximum of 58 meters high, has in its central arch dedicated to Emperor Trajan and the towns in the area that helped the construction, its most decorative element.
Another beautiful bridge that crosses the Tagus is that of San Martín, built in the Middle Ages and located at the other end of the city. 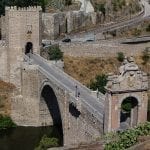 6. The Alcazar, one of the places to visit in Toledo

The Alcazar, a medieval fortress located in the highest part of the city, is another of the emblematic places to see in Toledo.
This huge rectangular building has its origins in Roman times, although it was not until 1525 when King Charles I took his court to this city and rebuilt the building with the shape that can be seen today.
Although we believe that the visit to the interior is expendable if you are only one day in the city, it is worth approaching the Alcazar to see its exterior and enter the Library of Castilla-La Mancha, free of charge, with good views of the city. city ​​and one of the four towers from the top floor, where the cafeteria is.
Visiting hours: Thursday to Tuesday from 11am to 5pm.

Another of the most essential places to visit in Toledo is the Church of Santo Tomé, where «The Burial of the Count of Orgaz» is located, one of the great masterpieces of Doménikos Theotokópoulos (El Greco).
This oil on canvas that is almost five meters high and was painted by El Greco between 1586 and 1588, represents the burial of Gonzalo Ruiz de Toledo, lord of the town of Orgaz, in this church.
Although the church does not stand out above others and you can not take pictures of the painting, it is very worth paying the almost 3 euros that the entrance costs, to enjoy one of the great works of art in the city.
If after seeing this wonder you have left more desire for works of El Greco, you can approach its museum located 10 minutes walk from the church, where you can see great works of the Mannerist style of the painter like El Apostolado, San Bernardino o The Redeemer.
Church visiting hours: every day from 10 a.m. to 5:45 p.m.
Museum visiting hours: Tuesday to Saturday from 9:30 a.m. to 7:30 p.m. and Sunday from 10 a.m. to 3 p.m. 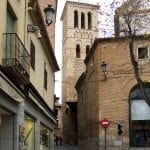 Zocodover Square, the nerve center and main square for many centuries, is one of the places with more atmosphere to see in Toledo.
This rectangular porticoed square, whose name comes from Arabic, is surrounded by buildings of Castilian architecture and has several entrance entrances, among which the Arch of Blood stands out.
In addition to everything mentioned above, this square is a good place to try the typical marzipan in one of the shops that surround it, buy a souvenir or have a drink on a terrace.
Do not forget, if you are going to spend the night in the city, that from this square you can start a pleasant walk through the alleys of the old town under the light of the street lamps, which without any doubt, will become one of the best things to do in Toledo. 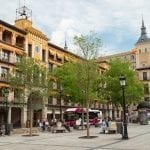 9. Church of the Jesuits

The Church of the Jesuits or San Ildefonso, built in baroque style for more than a century, between 1629 and 1765, is another of the buildings to visit in Toledo.
The most prominent elements of the church is the facade and the main nave in white, with two large baroque altarpieces, a dome, several chapels and the main altar.
Despite its beauty, this church would not be among the essentials of the city, if it were not for the incredible views it offers of Toledo from its two towers and the passage that unites them.
Visiting hours: every day from 10am to 6:45 pm from March to October. The other months it closes an hour before. 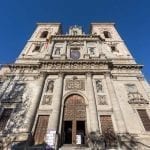 10. Mosque of Christ of the Light

Near the Puerta de Bisagra, one of the main accesses to the walled city of Toledo, is the Mosque of Cristo de la Luz, our latest recommendation from the list of places to visit in Toledo.
This chapel or church of Cristo de la Luz was built in 999 as a mosque and is considered the best preserved building of the Muslim era of the city because despite the Christian conquest of Toledo in the twelfth century and some subsequent remodeling , the architectural ensemble was largely respected, being able to observe the typical horseshoe arches of Muslim art.
Visiting hours: every day from 10am to 6:45 pm from March to October. The other months it closes an hour before. 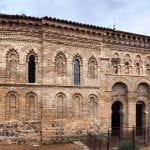 How to get to Toledo from Madrid

The most common way to enjoy the places to visit in Toledo is to go from Madrid, taking a train or bus.
The high-speed AVANT train will take you from the Atocha Station to Toledo in 33 minutes for less than 14 euros and although trains leave every hour it is advisable to book the tickets the day before, especially if you travel on a holiday or weekend to Do not run out of places.
From Toledo station you can walk to the center by climbing some escalators that will take you to the Plaza de Zocodover.
Another cheaper option is to take a bus from the ALSA company in the Elliptical Plaza Exchanger that will take you near the escalators of Zocodover Square, in 50 minutes for 5.5 euros or 10 euros, if you buy round trip .
Beauty Cultural Urban
Share