The 10 essentials to see in Córdoba

What to see in Córdoba? Córdoba, one of the most beautiful cities in Spain, is full of monuments and places to see and things to do. Unique monuments, squares, alleys, Roman remains, festivals, exquisite cuisine and a fantastic atmosphere are some of the things that await you in Córdoba, one of the 15 cities declared a World Heritage Site in Spain.

The Mosque-Cathedral is the most emblematic monument in the city of Córdoba. A place where the Gothic, Baroque, Renaissance and Mudejar styles merge giving rise to a unique monument in the world.

The Patio de los Naranjos will welcome you and show you its beauty by inviting you to sit next to its fountain before accessing the interior of the temple.

Once inside the temple we recommend that you enjoy it calmly, contemplating each of its corners. One of the most beautiful, and that of course you should not miss, is the maqsura. Place that was reserved for the prayer of the Caliph. 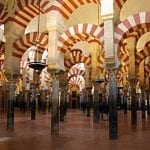 The city of Córdoba has 4 World Heritage declarations, Medina-Azahara is one of them. It is an archaeological site, located 8 kilometers from the city center, where the ruins of the city that was the nucleus of power of the Caliphate of Córdoba can be seen. You should not leave Medina-Azahara without going through the Salón Rico, the most beautiful place of those that are preserved and, possibly, of all those that existed at the time of the city’s splendor. It was the place where the Caliph received the foreign leaders who came to the city. More about Medina Azahara.

It is one of the 48 places declared a World Heritage Site in Spain. 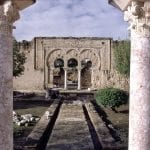 The Alcázar de los Reyes Cristianos is another of the monuments that you should not miss in Córdoba. A fortress in which the Catholic Monarchs spent several years while leading the campaign against the Kingdom of Granada. In addition, it was the place where Christopher Columbus asked them for help to undertake the journey that would take him to discover America. It is a monument steeped in history and peace. We recommend you to stroll through its gardens calmly and fully enjoying its beauty. 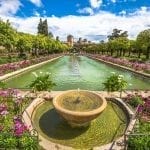 It is one of the most beautiful bridges in Spain. For centuries it was the only entrance to the city from the south, which is why it carries a lot of weight in the history of the city. In addition, it is one of the hallmarks of Córdoba, forming part of one of the best known images of the city, the one formed by the Roman Bridge, the Guadalquivir river and the Mosque-Cathedral in the background. 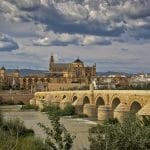 Plaza de la Corredera is one of the nerve centers of the city and one of the most beautiful squares in Spain. A porticoed square in the purest Castilian style, being the only one of its kind in Andalusia. In addition, it is a perfect place to tapas and savor Cordoba’s gastronomy in one of the hospitality establishments found in its arcades. 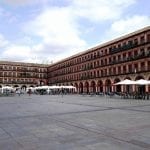 Hundreds of narrow and twisted streets make up the beautiful Jewish quarter of Córdoba. Among these streets and alleys you will find thousands of corners that you will love. The best way to get to know them all is to walk down their street aimlessly, letting yourself be carried away by whatever attracts your attention. 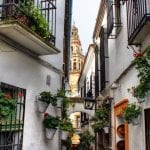 The Calleja de las Flores is one of those that you should not miss in the Jewish quarter. One of the busiest, most emblematic and most photographed. A narrow alley flanked by white-walled buildings decorated with flower pots. At the end of it you will find a small square with a cute fountain. When you return, you can enjoy a fantastic picture when you see how the street itself frames the minaret of the Mosque-Cathedral. 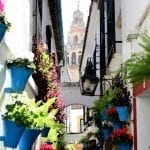 The Plaza de Capuchinos is one of the most magical corners of Córdoba. A small square full of peace in which is the famous Cristo de los Faroles and the church of the convent of the Capuchin Fathers. In addition, to access the square you will pass through the beautiful Cuesta del Baílio. A cobbled street, decorated with flowers and with a beautiful fountain. 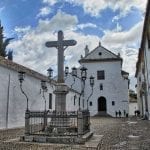 La Calahorra is a defensive tower of Arab origin that is located at one end of the Roman Bridge. It is open to visitors and from its highest point you can enjoy a beautiful perspective of the Roman Bridge with the Puerta del Puente and the Mosque-Cathedral in the background. 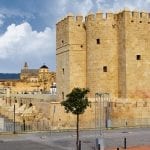 For several centuries Córdoba was a totally walled city. Today, some canvases and doors of this primitive wall are still preserved. Going through these doors, to access the Jewish quarter, you will feel that you are moving to the time of splendor of this beautiful area of Córdoba. In addition, along with many of the canvases of the wall that are preserved, pleasant walks decorated with fountains, ponds and flowers have been created, making it a pleasure to walk. 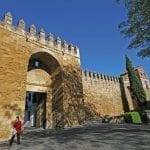